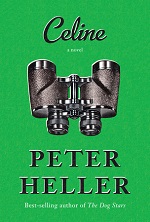 Heller’s newest introduces a very likable, elegant, private investigator in her later years. Blue-blooded Celine lives in a small apartment almost beneath the Brooklyn Bridge with husband #2, Pete. She is sixty-eight, she has emphysema, and her heart is broken. In the year since the Twin Towers fell her younger, then older sister passed away. She is just finding her way past the fiercest stages of grief.

Relaxing one morning (by working on a macabre sculpture involving taxidermy) Celine receives a phone call from a young woman. Gabriela is a fellow Sarah Lawrence alum wondering if the famous “Prada P.I.” still takes cases. Celine is a daughter of privilege and an outlier in her family, preferring to forge a less-conventional route through life. She takes cases she considers “lost causes” – no spying on cheating spouses for her.

Celine considers whether she is up to taking on a case. Gabriela wants Celine to look into a cold case:  the disappearance of her father. Brash, adventurous, but long-broken by grief over the death of her mother. He was a National Geographic photographer on assignment covering grizzlies in Yellowstone Park when he disappeared. Celine and Pete pack up and head west.

Their first stop is a visit to Celine’s adult son Hank in Colorado to borrow his camper and a rifle. Hank and Celine have an easy and affectionate relationship – a bond reinforced with regular handwritten letters and a shared weakness. Her motherly concern over him and his recent separation is sincere but not overbearing.

Heller’s writing is fluid and descriptive, especially as the story moves into a western landscape. Celine’s strength, vulnerabilities, and quirks (for instance she declares she could live on beef jerky and marzipan) are conveyed warmly and with humor. Past cases are tantalizingly mentioned (such as “The Case of Penobscot Paul”) as though there was already in existence a whole back catalog of Celine Mysteries waiting to be read. But if Heller never revisits Celine, this book can stand on its own as a solid suspenseful mystery novel, an exploration of family bonds, and a glimpse into the life of a unique woman who found and followed her calling.