April was absolute madness. Between my state Library association conference and, well, life, I got nothing written for The Inky Whisk. I was, however, reading. A lot. So I will start catching up on some recent favorites this month – Mystery May! (at least according to the ALA’s Booklist magazine, and I have no reason to quarrel with them!) 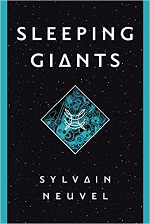 This is classified science fiction but there is a big – gigantic, even – mystery at the heart of “Sleeping Giants.” This intriguing debut opens with 11-year-old Rose investigating a glow in the woods near her home. Next thing she knows, the earth disappears beneath her feet and she lands in the palm of a giant metal hand, buried deep underground.

The narrative moves forward 17 years and Rose is now Dr. Franklin, a senior scientist studying the artifact. The only information gained over almost two decades is it is at least 3,000 years old, and has been glowing continuously with no apparent power source. Now a team comprised of scholars, scientists and military personnel will scour the globe seeking additional parts. Neuvel keeps suspense high as the truth of the artifact is revealed slowly through interview transcripts, news reports, experiment logs and the like. Conducting the interviews is an unnamed operative of unknown authority who must manage not just the team, but the political machinations – both local and global – around the artifact.

Readers who did not enjoy the style of Max Brooks’ “World War Z,” for instance, or dislike epistolary novels, might find this can bog down occasionally, but there is enough tension to keep the story moving at a good clip. A satisfying mystery with some nail-biting thriller moments, and first of a planned series. This should appeal even to those who typically shun sci-fi.

Review: The Assistants by Camille Perri