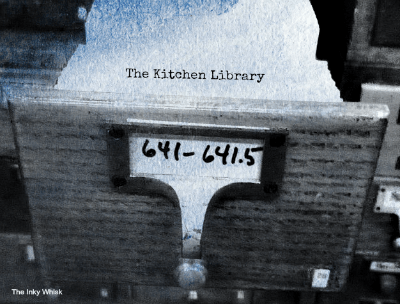 Buying an old cookbook – one that has been used – usually means you are buying an altered book. Marginalia, mini-reviews (“good!” or “Do not make again” or “Dad’s favorite,”) and extra recipes scribbled on the endpapers, are common. It is easy to spot the well-loved recipes because those pages bear stains and splashes, along with penciled-in modified quantities and cooking times.

The best extras flutter from the pages when you shake a new-old cookbook. Recipe booklets, newspaper tear-outs, shopping lists, and recipe cards are frequent fellow travelers in an old well-loved cookbook sent on to the book sale.

I’m guilty of marking my place with the same kinds of ephemera. Someday I suppose someone will find the Guinness Pork Chop recipe I printed off a website in 1997 and stashed in a cookbook. (I really did find this in my “American Woman” cookbook while I was gathering items for this post. I remember searching my recipe box over and over years ago for that damn paper and finally giving up and copying it onto a card from the website.) 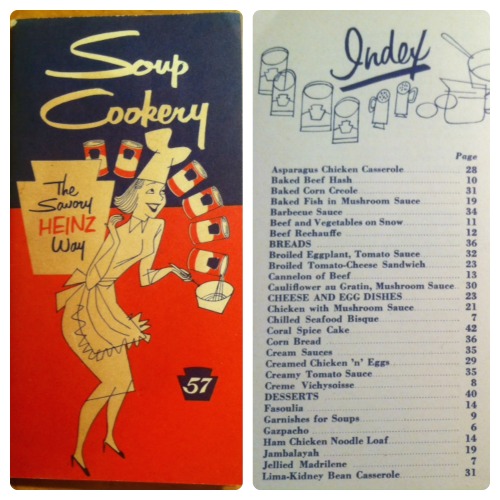 One of my favorite serendipitous finds is the Heinz Soup Cookery booklet. I have never made a thing out of it I just love the illustrations. Look how happy the cover chef is with all her soup cans! Dinner in a snap! This 45-page booklet is from around 1955. I know this because Michigan State University has a fantastic collection of these little company-sponsored recipe booklets. I was able to find a number of mine right on their site. It’s a fascinating collection and most of the full booklets are digitized.

This “Soup Cookery” book covers all aspects of meal planning from appetizer to salad to bread to dessert – for instance, the Coral Spice Cake made with – you guessed it – tomato soup. Do you prefer candy to cake? Spice drops can also be made with tomato soup.

END_OF_DOCUMENT_TOKEN_TO_BE_REPLACED

Even if you have shelves of cookbooks there is one that you reach for first. One that among the stacks of recipe cards, magazine pull-outs, and Pinterest boards is a stalwart you turn to for roasting times, béchamel, or icing. Mine is The Boston Cooking School Cookbook by Fannie Merritt Farmer.

My mother used an edition from the 1940s that was her mother’s. She loved it so much that when the family dog, who had good taste in cookbooks, chewed the cover (along with a few others – the cookbooks moved much higher on the shelf after that incident) my father had it restored. When I moved out she found me my own copy, a 1937 edition. I later added a second 1924 edition, found at an antique mall.

END_OF_DOCUMENT_TOKEN_TO_BE_REPLACED

The Menu: “Archetype” by MD Waters and Chicken Marengo 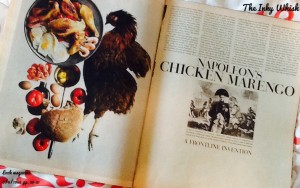 We have accumulated various things over the course of our marriage. Among those bits and pieces of years gone by is a stack of Look magazines. Something about the ads appealed to us and we would spend evenings flipping through the issues pointing out great mid-century furniture, technicolor bright food spreads, and other delights. One night husband showed me an article from the September 9, 1969, issue about the Napoleonic origins of a dish called Chicken Marengo. He asked me to make this odd combination of chicken, crawfish, brandy, and fried eggs and it has been a favorite ever since (with a few minor changes.)

The first thing I changed is the crawfish. I have an uneasy relationship with exoskeletal seafood – I like it until I think about it – so I downsized to peeled and deveined shrimp. I also left out the breadcrumbs called for in the Look magazine recipe because … well, I think  I was out of breadcrumbs at the time. And speaking of bread you will want plenty on hand to soak up the intense garlicky sauce this makes! 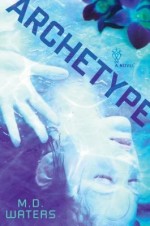 While dinner cooks let me tell you about a book I recently finished, “Archetype” by MD Waters  (and thank you NetGalley and Penguin First Flights for the opportunity to read an advance copy.) Our protagonist Emma wakes in a hospital with no memory. A man named Declan tells her she is his wife, and that she has had a terrible accident. But she dreams another woman’s life, and she hears another woman’s voice – and that voice tells her she may not be getting the whole truth.

This book is a thriller, a dystopia, and a mystery. It is fast-paced, compulsive reading that kept me up far too late on too many work nights. Fans of “The Handmaid’s Tale” by Margaret Atwood, “Before I Go to Sleep” by SJ Watson, and “The Stepford Wives”  by Ira Levin might consider picking up “Archetype.” My only complaint is the book occasionally reads like a classic romance novel.  I have nothing against romance, I’m just not fond of capital-R romance novels. That said, it isn’t overbearing, and if you like romance novels then that is one more thing for you to like about this book. I give it four whisks (out of five, of course.)

“Archetype” is part one of a two-part series with the second part, “Prototype,” due out in July 2014.

In a deep, wide saute pan brown the chicken in olive oil over medium heat. Sprinkle with salt. Add the garlic and saute one to two minutes. Add the brandy. Lay the shrimp on top of the chicken pieces. Cover the pan and cook 15 minutes. Keep an eye on the heat so your brandy doesn’t evaporate completely.

In a separate pan gently fry the eggs to desired doneness and serve over the chicken. Serve with crusty bread to soak up the sauce.