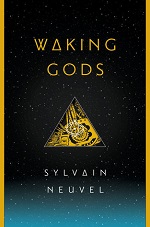 It is to author Neuvel’s credit that I was most of the way through Waking Gods (book #2 of The Themis Files, after Sleeping Giants) when I realized I was not just reading, but fully absorbed in a book about GIANT FIGHTING ROBOTS. And I had not rolled my eyes. Not once.

A stellar debut can be a hard act to follow but Waking Gods fulfills the promise of its predecessor with a plot combining elements of pulp sci-fi and international thriller, with a satisfying and tantalizing conclusion promising more to come. Characters we met in Sleeping Giants are fleshed out, given more depth and backstory.

Neuvel knows just how much information to spool out to keep the pages turning. Why is Dr. Franklin missing a chunk of time? Who is the girl in the opening pages having terrifying visions? And why are more robots, larger robots, suddenly appearing in major cities around the world and just standing silently?

END_OF_DOCUMENT_TOKEN_TO_BE_REPLACED

Review: All Our Wrong Todays by Elan Mastai 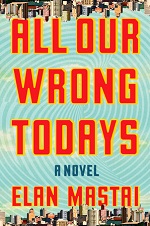 I don’t read a lot of time travel books. They tend to make my head hurt, or be romance novels. But the synopsis for All Our Wrong Todays was so compelling I had to give it a go and it was well worth it.

Part of the appeal of Mastai’s debut novel is its take on the well-documented (in literature, at least) consequences of monkeying around in the past. Tom Barren screwed up time big time. He lives in the ideal 2016, or, he did. Flying cars, unlimited free energy, prosperity for all. He says, “punk rock never happened in my world. Punk rock wasn’t required.” All because in 1965 genius inventor Lionel Goettreider turned on the engine that would change the world. But in 2016 Tom will make a rash decision that alters his present to the 2016 we know. Goodbye Jetsons, hello … this?